As the Enterprise Africa Summit begins in Accra, Ghana, we take a look at a trio of inspiring social entrepreneurs who are developing resilient solutions to some of Africa’s challenges.

The vital role that enterprise plays in the development of African countries will be explored at the Enterprise Africa Summit in Accra, Ghana this week. Three days of talks between 22 and 24 March will explore different facets of encouraging and supporting enterprise in the continent.

A key focus of the conference is resilience, for two reasons: it’s tough to survive as an enterprise in Africa, so enterprises need to be robust themselves, and strong enterprises help to improve the resilience of the societies in which they operate.

For example, in the absence of formal jobs in some areas, entrepreneurship provides a valuable outlet for young people’s ambitions. Developing entrepreneurial skills helps young people to adapt to changing circumstances and thrive in the face of economic and other challenges.

Social entrepreneurs, in particular, help to tackle social and environmental problems at the same time as providing goods and services for their communities. Their work brings together different people to trade in products, services and information. And, by doing this, they strengthen – and build the resilience of – their communities.

As the summit begins in Accra, we highlight three social enterprises that are using local resources and technology in their relatively under-resourced communities to achieve social impact while earning an income for themselves and their peers. The entrepreneurs at the heaad of each of these three businesses will be attending the event to develop their work – they will be networking with others, learning from masterclasses and exploring markets in other countries.

In Ghana itself, one particularly successful enterprise is Zaacoal. The problem its young founder, Amin Sulley, wanted to solve was multifaceted. First, there was Ghana’s reliance on burning wood or kerosene to cook.

The issue with the first is perhaps obvious: wood comes from trees and cutting them down to burn is not good for the environment. It is estimated that 70-80% of households across Africa depend on wood or charcoal in this way.

Then there are the health issues of the smoke that is produced when cooking indoors. In sub-Saharan Africa, indoor smoke causes some 400,000 deaths a year.

Sulley, who studied law, believes the answer lies in discarded coconut pods. The material is a massive waste problem, second only to plastic in cities like Accra, which has over 1,000 coconut sellers.

Once Sulley had worked out how to turn the pods into charcoal, he had a smokeless, environmentally-friendly product with social impact – black gold.

He has worked hard with business support organisations and others to develop his idea and today the enterprise has a suite of products, including charcoal for barbecues, shisha pipes and medical use. It takes orders online, with free delivery within Accra, and boasts 25m customers to date. What’s more, it’s tackling a big problem of waste material and doing something positive with it.

Totohealth is addressing a different kind of health issue on the other side of Africa, in Kenya. If knowledge is power, the organisation is making that power open source.

The social enterprise uses mobile technology to reduce maternal and child mortality (pictured above). Users are registered through hospitals. Once they have registered which stage of parenting they are at, parents receive text messages giving them health advice.

For parents of a nine-month old baby this might be: “If by now your child is not able to creep or crawl, he has a minor delay in his development. Stimulate him by placing toys just out of his reach.”

The service will also remind parents about check-ups or vaccinations at local health centres. It is particularly effective in rural areas where mobile phone reception exists, but not internet.

If knowledge is power, Totohealth is making that power open source

So why is there a need for Totohealth? According to the World Health Organisation, Sub-Saharan Africa is the most dangerous place in the world for a woman to have a baby. Children in sub-Saharan Africa are 15 times more likely to die before the age of five than children in developed regions. Many of these deaths are preventable with access to the correct resources and information and Totohealth is supporting people to get the resources and information they need.

Totohealth sells its service to other organisations with set prices for the number of users that are signed up. More than 30,000 parents are subscribed to the service with 3.7m messages exchanged so far – another example of a resilient business solution to a social problem in Africa. 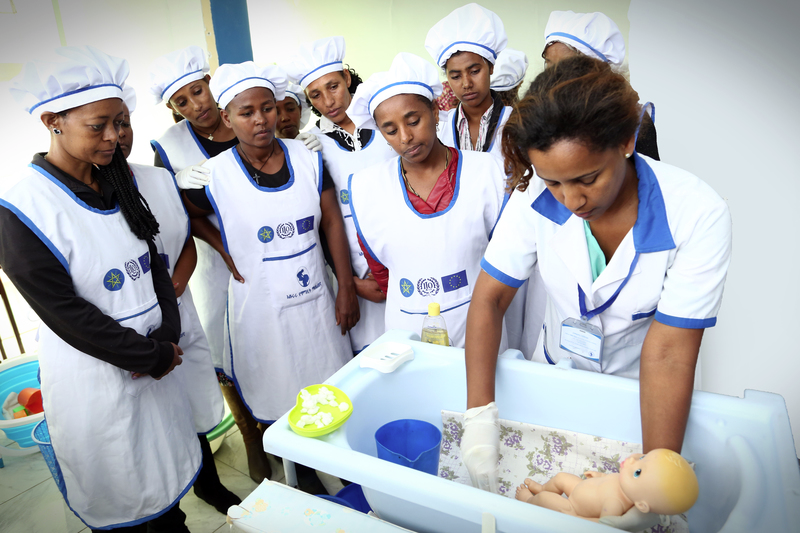 Still in the east of Africa in neighbouring Ethiopia, a social entrepreneur came up with another way of supporting children after returning home from work one day and noticing a difference in his child.

Solomon Mulugeta was concerned that his three-year-old son had started to take on some of the language and behaviours of his nanny. His concern was that if his nanny – who was untrained – spoke incorrectly, then his son would do the same.

After thinking over the his worries for a while, Mulugeta, who had also worked in an NGO, began exploring some ideas. Ethiopia’s economic growth means more working parents need childcare and he began to carry out research into how to make this more effective.

This led to Eshururu Training being launched in 2013. It provides nanny, childcare and housekeeping training and aims to improve the quality and standard of care for infants and young children. As well as improving childcare, it’s also contributing to Ethiopia’s economic growth by providing jobs.

Mulugeta’s business started in a way common to many social entrepreneurs – by seeing a social challenge and spotting an opportunity to improve things. Mulugeta says: “I realised that this problem could be turned into an opportunity and it could create a sound business proposition.”